St Mary's is an Open Church - Open to God, Open to You

Trish and her Marathon

Well who would have thought it? Some days you can surprise yourself.

Last autumn, in a moment of madness, I signed up to run the Milton Keynes Marathon in 2020. I had been running on and off for a few years and had managed a few half marathons. I thought it was “now or never.”

In December I downloaded a running programme that has ruled my life for the past five months. I have plodded the streets of St Albans about three times a week, recording every mile on my wall chart and can confirm that I have run 64 times and a total of 487 miles.

In March my race was cancelled. But, having got so far in my training and wanting to run to raise money for “Up On Downs” a small charity that supports children with Downs Syndrome and their families, I decided I would have to continue with my training and find an alternative place to run.

The head teacher of the school where I teach was more than happy to let me attempt the marathon on their running track. So on Tuesday May 5th to the cheers of a few teachers and the children of key workers who were in school I set off around the edge of the school field. The circuit was a quarter of a mile which meant I had to run 104 loops. Now unfortunately the school field is on a slope which was fine for the 104 downhill sections, but the 104 uphill parts were hard work.

One child, armed with a clip board decided to create a tally chart to check I didn’t cheat, but she gave up after two hours. 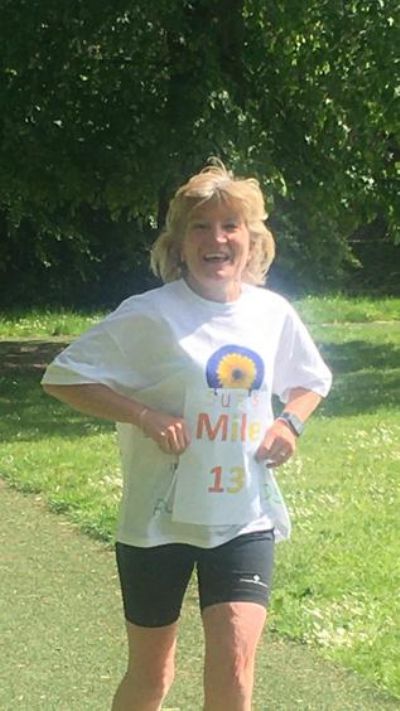 Throughout the morning friends popped in to cheer me on. At one point, Sue arrived and read out a different message of support from all my lovely friends at St Mary’s. They helped me through quite a few laps. Even some builders in the garden of a house that backed onto the school stopped to clap once they realised what I was doing.

All my preparation paid off and gradually I whittled down the miles at a steady plod. I listened to music, I chatted to people who popped in and I talked to myself. 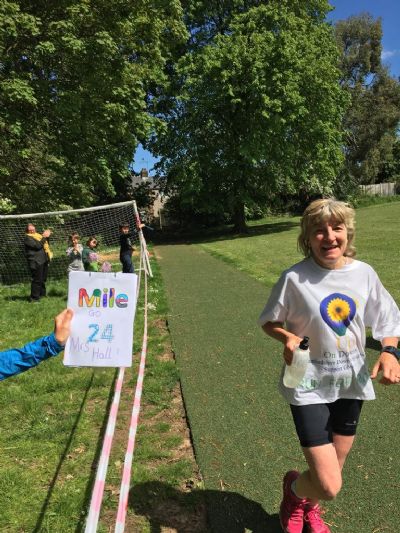 Then mile 18 arrived and I found that really hard, unfortunately mile 19 was even worse! My legs ached and I needed to rest but I didn’t give in. Mile 20 loomed and with it a new lease of life. I told myself I only had six more miles to go - a short training run. More people arrived to cheer me on, including Janet and Paul who brought with them a fabulous poster and calling me a star. Rose and her family were there too, blowing bubbles, squeezing hooters and making such a noise I could hear them all around the course. 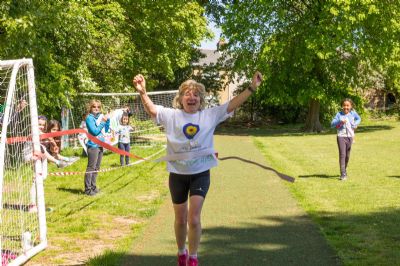 I felt as if I flew the final mile, it was so easy and as I ran through the finishing tape everyone cheered. Rose made me the biggest and best medal ever. It has pride of place in amongst my row of medals and nothing will ever top that. I finally finished in 5 hours 5 minutes. I came first, set a course record and a personal best! (Usually I have to scroll down to page 13 to find my position and time in a race.) No matter it was a race of one, I did it.

I am happy to report that 12 hours later, after a good night’s sleep, my legs still work – providing I don’t try to run.

Together we have raised over £2,000 for Up On Downs, a fantastic amount and far, far more than I was hoping to make. Thank you to each and every one of you for your support, your words of encouragement and your donations.